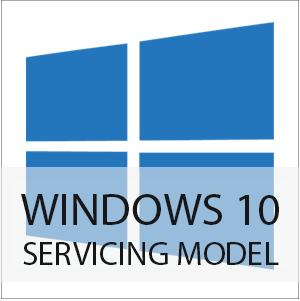 With Windows 10, a new model was introduced called “Windows as a service – WAAS”. Rather than new features being added only in new OS/every few years, WAAS will continually provide new capabilities. The Semi-Annual Channel is a twice-per-year feature update release targeting around March and September, with 18-month servicing timelines for each release

Starting October 2016, Windows also changed it update model to have a single Monthly Rollup that takes care of security and reliability issues. The update will be published to SCCM/WSUS automatically. Each month’s rollup will supersede the previous months, so there is only ever the most recent update to install to be up to date.

Additionally, Windows 10 is compatible with most hardware and software capable of running on Windows 7 and Windows 8. Software compatibility is so high because Win32 application programming interfaces were not changed very much between versions. As a result of this, the app compatibility testing process is simplified. Finally, most hardware drivers that functioned in 7 or 8 will continue to function in Windows 10.

Released twice a year, one in March and one in September. Since feature updates contain an entire copy of the OS, they are also used to install Windows 10 on existing devices running Windows 7 or Windows 8.1, and on new devices where no operating system is installed. Examples include 1703, 1709, aka March 2017, Sept 2017

In addition to larger feature updates, Microsoft will publish regular monthly quality updates on Patch Tuesday. These smaller updates are similar to the monthly security updates and patches that you have been used to before Windows 10, but there are some significant differences. For one, the new quality updates are specific to the Windows 10 versions you are currently running. Secondly, expect Microsoft to publish as many of these as needed for any feature updates that are still in support.

No longer will you see individual KB updates, but rather the Monthly Rollups as such:

Servicing Channels are determined by the frequency with which the computer is configured to receive feature updates. In other words, it defines when a “Feature Update / A New OS” is available to you after it is released by Microsoft.

With all the latest versions of the Configuration Manager console (see my other article New Features in SCCM) the Windows 10 Servicing Dashboard is now available to you to begin deploying Windows 10 feature updates. This will be used to deploy Windows 10 in SCCM. 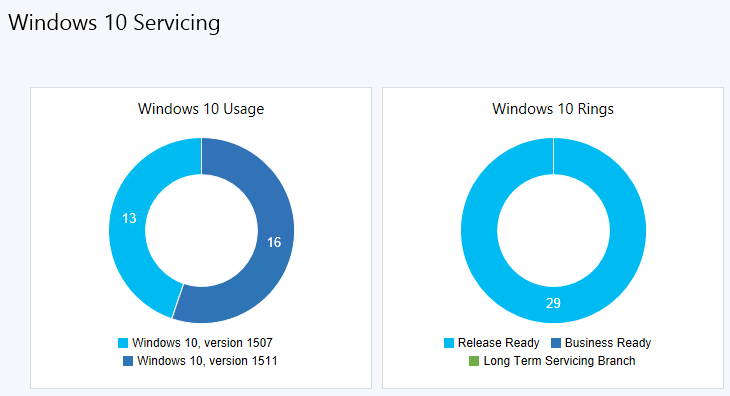 First, let’s take a closer look at the area on the Windows 10 servicing dashboard defined as a Deployment Ring. A ring is a groups of PCs that are all on the same branch and have the same update settings. Rings can be used internally by your company to better control the upgrade rollout process.

Deploying prior versions of Windows required you to build groups of users/computers to deploy the new OS out to in phases. These typically ranged from the most adaptable and least risky (like your IT staff) to the least adaptable or riskiest (like executives). Now with Windows 10 deployment Rings, a similar tactic exists, but the ideas is a little different.

Deployment Rings, in the simplest sense, are a way for you to separate machines into your deployment timeline. The idea is to have each deployment ring reduce the risk of issues derived from the deployment of the feature updates by gradually deploying the update to entire departments, just like you had before.

Creating your Deployment Rings should only really need to occur once, but revisit from time to time to assure everything is still how you want it.

You could additionally have a ring for the LTSC Serving Channel for things such as ATMs if you were a bank.

Create SCCM Collections Based Off Your Deployment Rings

You must start the Windows 10 servicing process by creating collections of computers that represent the deployment rings we defined above. In this example, you create four collections:

Limit these collections to only hold Windows 10 computers. If you don’t already have a Windows 10 collection to limit from, simply create one with a query such as:

Finally, after you have created your four collections, add the computers inside of those collections that you would want represented in each deployment phase.

There are two ways to deploy Windows 10 feature updates with SCCM.

For this article, we are going to focus on Windows 10 Servicing Plans as Task Sequence deployments can be covered in other areas. For example, let’s create the serving plan for the collection, Windows 10 – Production. Creating the serving plans for the other collections will be a similar process.

Excellent. You now just created a servicing plan, for the Windows 10 – Production collection, which is based off the Windows 10 –Production Deployment Ring. As you can see as we created the serving plan, your Production users will get the Windows 10 Feature Update automatically deployed to their computer’s 120 days after it is released by Microsoft. That’s pretty simply, right?

Finally, you could elect to create your Windows Update ADRs to deploy Monthly Quality Rollups to this same collection 7-14 days after they are released on patch Tuesday, completing the criteria we reviewed in the Deployment Rings table earlier. Servicing plans use only the “Upgrades” software updates classification, not cumulative updates for Windows 10. For those updates, you will still need to deploy by using the software updates workflow.

Converting from BIOS to UEFI without Wiping Harddisk (MBR2GPT.EXE)

UEFI Convergence has been a big issue, and required a “wipe and load” until Windows 10 1703 released MBR2GPT.EXE. This tool is used to Shift from MBR to GPT so you can go from BIOS to UEFI without having to reformat. Usually, MBR + BIOS, and GPT + UEFI go hand in hand. This is compulsory for some systems (eg Windows), while optional for others (eg Linux).

Mentioned in the 1703 feature updates below, MBR2GPT.EXE converts a disk from the Master Boot Record (MBR) to the GUID Partition Table (GPT) partition style without modifying or deleting data on the disk. The tool is designed to be run from Windows PE or from the full Windows 10 OS by using the /allowFullOS option.

MBR2GPT.EXE is located in the Windows\System32 directory on a computer running Windows 10 version 1703 (Creators Update).

“Use this tool for in place upgrade.”

*After the disk has been converted to GPT partition style, the firmware must be reconfigured to boot in UEFI mode.

Compared with MBR disk, A GPT disk can support larger than 2 TB volumes where MBR cannot. A GPT disk can be basic or dynamic, just like an MBR disk can be basic or dynamic. GPT disks also support up to 128 partitions rather than the 4 primary partitions limited to MBR. Also, GPT keeps a backup of the partition table at the end of the disk. Furthermore, GPT disk provides greater reliability due to replication and cyclical redundancy check (CRC) protection of the partition table. GPT disk partitioning style supports volumes up to 18 exabytes in size and up to 128 partitions per disk

UEFI enables better use of bigger hard drives. Though UEFI supports the traditional master boot record (MBR) method of hard drive partitioning, it doesn’t stop there. It’s also capable of working with the GUID Partition Table (GPT), which is free of the limitations the MBR places on the number and size of partitions. GPT ups the maximum partition size from 2.19TB to 9.4 zettabytes.

UEFI may be faster than the BIOS. Various tweaks and optimizations in the UEFI may help your system boot more quickly it could before. For example: With UEFI you may not have to endure messages asking you to set up hardware functions (such as a RAID controller) unless your immediate input is required; and UEFI can choose to initialize only certain components. The degree to which a boot is sped up will depend on your system configuration and hardware, so you may see a significant or a minor speed increase.

This section is meant to provide a broad overview of the changes in the latest Windows 10 Feature Updates.

Below is a list of some of the new changes in Windows 10 1709, also known as the Fall Creators Update. 1709 also contains the features from version 1703.

Below is a list of some of the new changes in Windows 10 1709, also known as Creators Update.